The “Me” in the title is a comparatively unknown Marx named Julius (1895-1977), who, under the nom de plume of Groucho, enjoyed a sensational career on Broadway and in Hollywood with such comedy classics as Animal Crackers, Monkey Business, Horse Feathers, Duck Soup, A Night at the Opera, and A Day at the Races. His solo career included work as a film actor, television game show emcee, and author of The Groucho Letters, Memoirs of a Mangy Lover, and his classic autobiography, Groucho and Me.

With impeccable timing, outrageous humor, irreverent wit, and a superb sense of the ridiculous, Groucho tells the saga of the Marx Brothers: the poverty of their childhood in New York’s Upper East Side; the crooked world of small-time vaudeville (where they learned to carry blackjacks); how a pretzel magnate and the graceless dancer of his dreams led to the Marx Brothers’ first Broadway hit, I’ll Say She Is!, how the stock market crash in 1929 proved a godsend for Groucho (even though he lost nearly a quarter of a million dollars); the adventures of the Marx Brothers in Hollywood, the making of their hilarious films, and Groucho’s triumphant television series, You Bet Your Life!. Here is the life and lunatic times of the great eccentric genius, Groucho, a.k.a. Julius Henry Marx.

“The book is never less than readable and its glimpses of American show business at its least glamorous are simple, true and sometimes rather touching.”—Times Literary Supplement

“My advice is to ration yourself to a chapter a night—it’s that delectable.”—Chicago Sunday Tribune 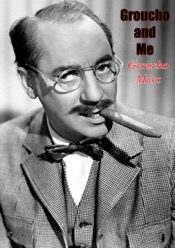