THE TEMPORARY DUCHESS is book 3 of the Billionaire Duke series. This series needs to be read in order. If you haven’t read the other books, now’s a good time to go back and see what you missed. Start with THE BILLIONAIRE DUKE.

American billionaire and reluctant new duke Riggins Feldhem has fallen prey to the first part of the Dead Duke's scheme and is now a married man with a beautiful new duchess. As Riggins tries to wrest control of his life back from the wily Dead Duke two things stand in his way—his growing feelings for his new wife and her growing allegiance to the Dead Duke. Can Riggins regain control of his destiny with his heart intact?

The new duchess has secrets and an agenda of her own. But mostly she wants Riggins' heart and believes the Dead Duke, with his unexpected appeal, may actually be her ally.

Scroll up and grab your copy today! 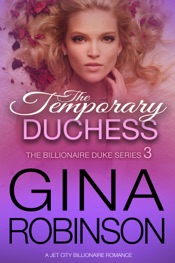