Millions of words have been written about America's first families. But what has been said about our "first families' families" - the colossal collection of animals, exotic and familiar, stubborn and playful, large and tiny, who have been welcome, and often celebrated, residents of the White House and its grounds since the days of George Washington?

Over the years, the White House has been home to a unique assortment of pets. As a guest of John Quincy Adams, General Lafayette kept a live alligator in the East Room. Calvin Coolidge's Enoch, a huge white goose, gift from actress Marie Dressler, was said to be worth $100,000. Young Tad Lincoln surveyed his home grounds in a cart drawn by two pet goats. Warren Harding's Laddie Boy, a talented Airedale, was interviewed by reporters on national affairs.

There were Franklin Roosevelt's famous Fala, Caroline Kennedy's Macaroni, Lyndon Johnson's beagles Him and Her. And Teddy Roosevelt's whole menagerie, which included a lion, snakes, roosters, a zebra, and five bears.

The list of presidential pets is endless, and the stories about them and their owners are bizarre, hilarious, touching, and filled with incidents that point out many a first-family soft spot, peculiarity and, in every case, unabashed love of animals. Margaret Truman, a former White House resident herself, charts this special heritage with warmth and imagination. 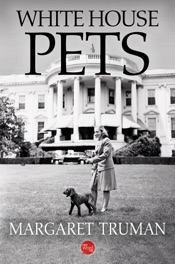