The first three exciting novellas in the Jet City Billionaires romantic comedy series that readers can't put down. Find out why they're calling the Switched at Marriage series, “Fun. Flirty. Fantastic!"

A Wedding to Remember

She always dreamed of a lavish wedding with a handsome groom. So how did she end up married to a billionaire without a wedding at all?

SWITCHED AFTER THE ALTAR…

Kayla Lucas can't believe she's being divorced by a man she never married. That's some new kind of low. And certainly not by Justin Green, Seattle's youngest billionaire and the city’s most eligible nerd. Sure, Jus had a crush on her in college, but someone has to be pranking her—she hasn’t seen him in years. She's ready to play along until she walks into a meeting with Justin and his lawyer. Justin is much hotter than she remembers. And has proof she's legally married to him. He has a proposal—stay his wife for a year and he's willing to pay. But how are they married? And just what will it cost her to accept? Could she possibly lose her heart to a guy like Jus?

Sure, she's married. Sort of. That doesn't mean she's dead.

FLIRTING AFTER THE ALTAR…

Kayla is in over her head. Being a billionaire’s wife of convenience for a year isn’t the fantasy job she expected. Sure, the pay is good. If she can last the year and not get caught in the lies she and Justin are telling.

But she’s off men, so it should all be good. Until she meets Justin’s hot billionaire friend, Lazer Grayson, and the chemistry between them is immediate and undeniable.

With such intense competition from his hot friend, can Justin possibly win Kayla’s heart?

To Have and To Hold

Should a decoy bride have in-law problems?

RELATIONS AFTER THE ALTAR…

Justin's mom wants blood. Even though Justin is her least favorite child, no one messes with him on her watch. Mama Green is out to defend her baby boy and protect him from predatory, gold digging wives, namely Kayla. And Kayla's parents aren't making the situation any better. Not only that, but Justin has secrets. And Kayla's single friends are full of marital advice. Where is a girl to turn?

Can a marriage of convenience survive the in-laws?

The Jet City Billionaires world presents romantic stories full of humor, laughs, secrets, mysteries, and poignancy. The Switched at Marriage Series follows the story of Justin and Kayla in a modern twist on the classic marriage of convenience story.

Scroll up and grab a copy today! 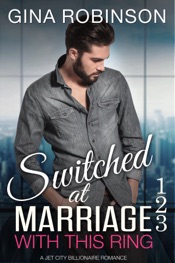